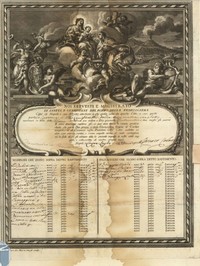 Traffic restrictions in ports at the time of the epidemics

In order to combat epidemic diseases in addition to treatment, it is essential to use security, prevention and quarantine measures for land and sea circulation. But how are ports controlled? How do you check where the ship comes from? On what basis is a quarantine obligation prescribed?

Also for the sea routes we proceed in the same way as for the mainland, where you can deny the right to "practice" with others if you declare that you come from a place where there is an infection. For the control of vessels one of the instruments used is the Free Health Practice (LPS) issued by the Office of Maritime Health - now also in a short time by email or radio - to authorize landings and embarkations, as well as commercial operations, on the basis of a series of valuable information on the state of health of the crew, the origin of the ship, its destination. Recently, considering the international epidemiological framework related to the Coronavirus, the Ministry of Health has requested the Harbour Master's Office to check that each ship, regardless of its origin, national or international, is in possession of the LPS accompanied by: maritime health declaration; copy of the certificate of exemption from sanitation; list of passengers and crew members; list of ports touched in the last 14 days.

These "health licences" are nothing new at all. They have in fact been used since the time of the plague, until the early nineteenth century, and then cholera when pandemics recorded millions of deaths. They were a sort of passport that allowed - or sometimes prevented - the operations of landing and embarkation. If the ship came from a suspicious or infected place, for example, a so-called "dirty" licence was issued, forcing the ship into quarantine. In the most serious cases these periods of isolation of vessels could consist of up to forty days of isolation to be spent on the vessels or in specially created places, temporary barracks or more complex structures such as lazarettos. The sentences for offenders were very harsh and included various measures, up to the death sentence.

Even until the beginning of the nineteenth century many of these medical licences, produced in every state, were rich in information and often also splendid illustrations, so much so that they took on the characteristics of true works of art. Licences of the Kingdom of Naples can be found in various state archives and libraries, such as the one issued in Naples on July 5, 1787 and kept in the San Raffaele Library of the University Vita-Salute San Raffaele in Milan. On the document are clearly visible the signs of a disinfection, which was usually carried out when the boats arrived. An engraving shows in the centre St. Gennaro and the Virgin of Constantinople, protectors of the city; at the sides the coat of arms of the city and the Kingdom and, in the background, the smoking Vesuvius. Issued by the Deputies of Health, the Magistrate of Health and the Guardian of the Port of Naples, this licence attested that the ship in question, a Maltese spur with 8 crew and 4 passengers, had called at Naples. As a healthy place, the ship could be welcomed in the port of Civitavecchia, where she was heading, and therefore receive without any fear a "free and safe practice", which allowed her circulation. As established also in other states on "free practice" there were not only the generalities but also a physical description of the men. The reason was to avoid, in the case of a death on board, an exchange of person with an undeclared stowaway at boarding: in a period of great health uncertainty it was necessary to avoid the danger that even those who had not undergone any health check could travel. 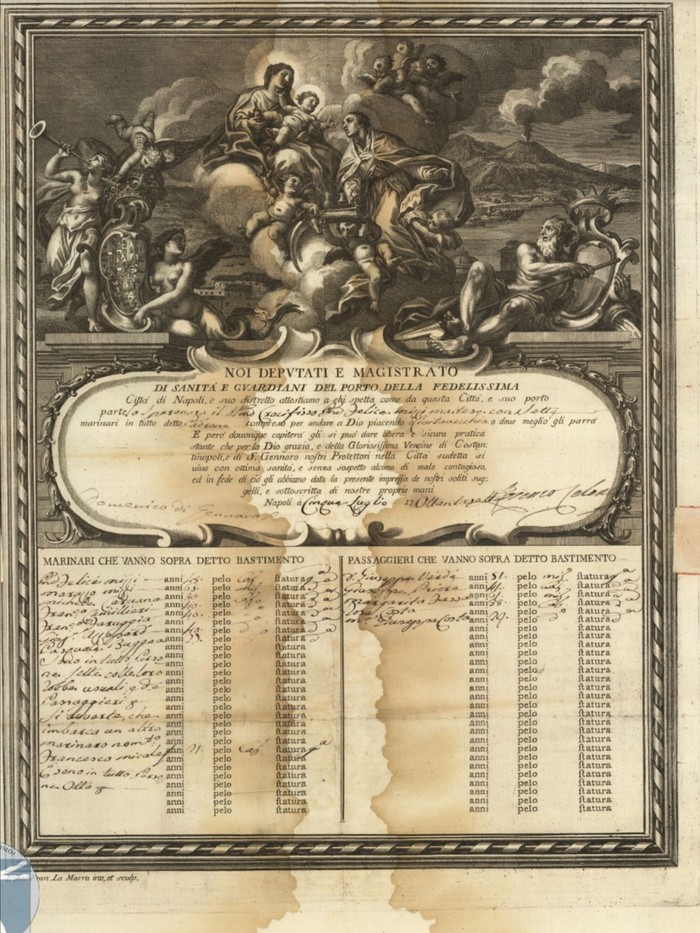