Mobility between the Mediterranean and the Atlantic in the modern age 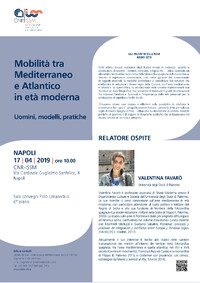 Mobility between the Mediterranean and the Atlantic in the modern age
Men, models, practices

In recent decades, numerous studies have highlighted how much the circulation of men - ministers, merchants, religious, etc. - has increased in the last few decades. - has been a key element in the construction of the Spanish Monarchy of the modern age. A vehicle of experience and knowledge, as well as a guarantor of the transfer of material objects, mobility contributed to consolidating networks that linked the different kingdoms of the Crown, between the Mediterranean and the Atlantic area. In this perspective, the reconstruction of transnational careers does not provide a biographical data, but allows to show the degree of interaction between family and factional interests and the importance of personal networks for the construction of balances at the local level.

Through some case studies we will reflect on the possibility of redefining the connections between geographically distant "spaces" - the Iberian and Italian peninsulas, the kingdoms of New Spain and Peru - through the circulation of men, models, government practices and to read the political dynamics that unfolded in the different territories in an integrated perspective.

THE LECTOR: Valentina Favarò is associate professor of Modern History at the Department of Cultures and Society of the University of Palermo. Her research has focused on the Mediterranean area in the modern age, with particular attention to the political and military role of the Kingdom of Sicily and its function as the frontier of the Spanish Monarchy (La modernizzazione militare nella Sicilia di Filippo II, Palermo, 2009). The study on border areas was then extended to Europe and Latin America, merging into the miscellaneous volume edited together with Manfredi Merluzzi and Gaetano Sabatini, Fronteras: procesos y prácticas de integración y conflictos entre Europa y América (siglos XVI-XX) (FCE, Madrid, 2017). He is currently interested in studying the transnational careers of ministers within the territories of the Spanish Monarchy, between the Mediterranean and Atlantic areas, in the 16th and 17th centuries (Carriere in movimento. Francisco Ruiz de Castro and the Monarchy of Philip III, Palermo 2013, and Gobernar with prudence. Los Lemos, estrategias familiares y servicio al Rey, Murcia 2016).

INFO AND CONTACTS:
Secretariat of the Directorate
Institute of Studies on Mediterranean Societies (CNR-ISSM)
Antonio De Lorenzo
Tel: +39-081-6134086 (ext. 214)
Email: This email address is being protected from spambots. You need JavaScript enabled to view it.
www.issm.cnr.it