Between disciplinary societies and different models of capitalism 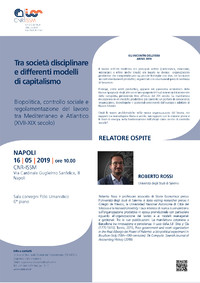 Between disciplinary societies and different models of capitalism
biopolitics, social control and regulation of work between the Mediterranean and the Atlantic

Modern work in the main sectors (shipbuilding, mining, iron and steel and finally also textiles) was based on various production organizations that included both small shops with two, three workers and large production facilities, organized with a workforce of hundreds of workers.

The obraje, as a productive unit, appeared in the economic panorama of New Spain (and of the other Spanish viceroys of South America) from the moment of the conquest, persisting until the beginning of the 19th century. The factory incorporated into an already existing production model a wealth of organizational, technological and managerial knowledge from Europe, adapted to the New World.  What are the new problems in the new organization of work, in the relations between free and servile labour; in the relations with raw materials and energy sources; in the transformation of the obraje as a means of social control?

THE SPEECHER: Roberto Rossi is associate professor of Economic History at the University of Salerno, he has been visiting researcher at the Colegio de Mexico, the Universidad Nacional Autonoma di Città del Messico and Harvard University. His research interests focus on the production organization in pre-industrial times with particular regard to the organization of work and management and management models. Among its publications: The cotton factory in Barcelona between innovation and persistence. the case of J.B. Sires y CIa (1770.1810). Turin, 2015; Poor government and work organisation in the Real Albergo dei Poveri of Palermo: a bio-political experiment in Bourbon-Sicily (18th-19th centuries). De Computis. Spanish Journal of Accounting History (2018)

INFO AND CONTACTS:
Secretariat of the Directorate
Institute of Studies on Mediterranean Societies (CNR-ISSM)
Antonio De Lorenzo
Tel: +39-081-6134086 (ext. 214)
Email: This email address is being protected from spambots. You need JavaScript enabled to view it.
www.issm.cnr.it