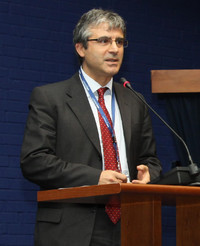 He collaborates with several International and Italian academic institutions, by having lectures and participating to Master courses and Erasmus programmes in the Universities of Naples, Milan, Haifa (IL), Ghent (BE), and Newcastle-upon-Tyne (UK). Since 2008, he is visiting researcher at Ghent University, first at the Centre for Planning and Sustainable Mobility (AMRP) and then at the Department of Telecommunications and Information Processing (I-Know), with projects on sustainable mobility and applications of renewable energy in the transports. He is scientific responsible of the research project “To an integrated hub & spoke strategy of Mediterranean Sea-Ports Cities”. Responsible for the overall planning and the field tests coordination of the WP5 “Smart Grids Solution”, in the INTERREG IVb NSR project “e-Mobility NSR” (2011-2014). Responsible for Ghent University of the ERASMUS course “Intensive Railway Programme in Newcastle upon Tyne” (RailNewcastle), Newcastle University (2012-2014). Lecturer at the Master Course on Transport Planning. Member of I-Know I-Move team, with studies on sustainable mobility and behavioural change in transport. From 2011 to 2015, he teaches sustainable mobility and Sea-rail connections, at the Newcastle University summer school (RailNewcastle).

From 2003 to 2007, he works at the European Commission - DG Transport and Energy in Brussels (BE), where he is responsible for the evaluation and monitoring of the Trans-European Transport Network. He contributes to the implementation of the projects and the TEN-T programme’s evaluation procedures, as well as to reorganise the proposals’ selection procedures in the framework of the TEN-T Multiannual Programme 2007-2013.

In 2007-2008, he becomes member of the Strategic Plan “Metropoli Terra di Bari (BA2015)” Scientific Committee, where he studies accessibility, sustainable mobility and Mediterranean identity topics. In 2009-2010, he is advisor of the European Commission in the Amendment of the Trans-European Transport Network Guidelines, in the field of Transport Intelligent Systems and New Technologies. He is active member of NETLIPSE, a network of academic experts, public officials and practitioners in the field of large transport infrastructure management, since 2008 and recently, for 2013 to 2015, he is scientific committee member.

He is referee for “Papers in Regional Science” and “Research in transportation economics”. He has published more than 80 articles, in books, journals, and conferences’ proceedings, and edited four books.

As researcher, he participated to several research programmes, such as:

As consultant, he has contributed to the preparation of the 2000-2006 Campania Regional Operational programme, and to the evaluation of the internationalisation measures of the Calabria Region. Since 2011, he collaborates with ANCE (Italian Association of Builders) in a training programme on European Union Project Management, addressed to Italian Regions and Municipalities and supported by the Italian Ministry of Economic Development (MISE).