News webinar - How to defend and promote the health of peoples 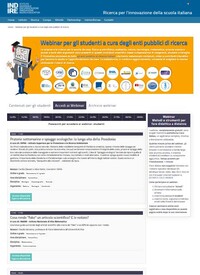 you'll find the webinar tab and the key to log in.

Webinar's purpose: Through the stories of CNR historians, the webinar aims to make known the strategies and interventions put in place between the Middle Ages and the Modern Age to respond to the fear of contagion in Southern Italy, answering the questions that will be asked by the participants.

DESCRIPTION OF THE WEBINAR. The Covid emergency showed how the entire globe was unprepared and unable to face the attack of an invisible enemy. In a few months we shared the impotence and reduced that widespread feeling of self-sufficiency and self-control as a superpower. The sense of omnipotence was replaced by the discouragement that united the common man with the scientist called upon by the latter to provide instruments to the policy that reduced investments and every instrument for the implementation of an ordinary and not extraordinary and emergency health plan such as the one that had produced millions of victims in past centuries.

"How to defend and promote the health of the people" is a question that dates back to the 1840s and is addressed to the Bourbon State in order to watch over, preserve and, above all, prevent any epidemic. The author is Carlo Antonio Broggia, not a doctor but an economist, a merchant, an expert in political and financial issues, who realized how important public health was for the population of one of the largest states on the Italian peninsula. The enemy still lurking was the plague. In the absence of a public health plan, what did Broggia recommend? First of all to control the land and sea borders; to apply isolation, now better known as social distancing; to impose quarantine; to select an incorruptible political class in the strict application of the rules. Both in the presence and in the absence of a welfare state, emergencies are fought with the instruments of politics. Naturally, there was no lack of hospitals/ospices, but they were not very safe in terms of hygiene.  In the cities and small rural centres they welcomed above all the less well-off while the nobility and bourgeoisie took care of themselves in their homes. Before the construction of the welfare state at the end of the 19th century, hospitals were more an expression of a system of charity and assistance than of care.

Amedeo Feniello (medievalist) and Raffaella Salvemini (modernist) answer the questions of Paola Avallone (economist) who, in the role of the reporter, accompanies us in a discussion on the health emergency from the Black Plague of 1348 until the end of the 18th century, when the plague bacterium slowed down its attacks leaving the witness to a new scourge: the cholera bacterium.

The webinar is open to the public

This email address is being protected from spambots. You need JavaScript enabled to view it.