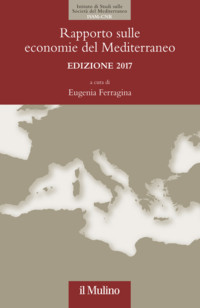 The 2017 edition of the Report published by Il Mulino is now available.

The Mediterranean area today, between unemployment, emigration and new opportunities for economic development.

This edition of the Report on Mediterranean Economies offers an updated political and economic analysis of the state of the region, on the eve of international and global developments that will affect the Mediterranean area, especially the areas most directly involved in conflict and poverty. Some of the key themes of the 2017 edition are: changes in the labour market, also in the context of the continuing economic crisis and deep demographic changes that have taken place in recent decades; the high rate of youth unemployment - especially among women - not only among the poorly educated population, but also among graduates; the phenomenon of brain drain, which causes emigration to the countries of southern Europe, which in turn are characterized by a strong influx of incoming migrants. The challenges they pose to international cooperation are numerous, from promoting stable employment to managing the "structural" emergencies of migration. New policy strategies, including the recently launched EU Migration Compact Plan, are an important effort to better manage migration processes induced by the lack of job opportunities. New development opportunities must also be explored in the spread of the green economy, which in a context characterised by environmental degradation and uncertain climate conditions can represent a challenge and an opportunity for the labour market, provided that integrated investment policies in innovation and vocational training can be promoted.

Eugenia Ferragina is a senior researcher at the Institute of Studies on Mediterranean Societies of the CNR and contract professor of Economics and Institutions of the Mediterranean Countries at the University of Naples "l' Orientale". Since 2005 she has been collaborating with the Report on Mediterranean economies, which she has coordinated since 2014.