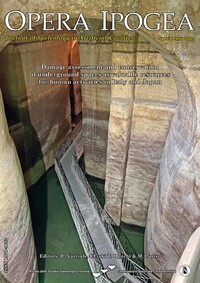 Published a special issue of Opera Ipogea: Journal of speleology in artificial cavities

In the Special Issue contributions of CNR-ISMed in the articles of Roberta Varriale, Tiziana Vitolo and Bruno Venditto.

"This special issue is the main scientific output of the homonymous bilateral project between Italy and Japan “Damage assessment and conservation of underground spaces as valuable resources for human activities in Italy and Japan”.  The project was financed within the agreement regarding the scientific cooperation between the National Research Council of Italy (CNR) and the Japan Society for the Promotion of Science (JSPS) signed on October 23, 2011. The fund supported mutual scientific exchanges between the teams, which were led by Roberta Varriale from the Institute for Studies on the Mediterranean (ISMed), Italy and by Chiaki T. Oguki from the Graduate School of Science and Engineering of Saitama University, Japan during the period 2018/2019.

In this context, two missions from representatives of the Italian team to Japan and two missions from the corresponding Japanese team to Italy were financed. During these missions the two teams had the opportunity to share their expertise with reference to experimental and multi-disciplinary approaches to the study, monitoring and management of several selected case studies within the new born class of Underground Built Heritage (UBH). Choice of the case study was dictated by criteria based on their archaeological, artistic and architectural values, while considering the historical and cultural uniqueness of the sites, and their connections with the identity of local communities as well.

In view of the significant communicative role played by the underground environment, stimulating several projects addressed towards regeneration of subterranean spaces in both Italy and Japan, these countries were considered to be exemplary study cases to compare the Eastern and Western approaches for knowledge and understanding of underground spaces that were excavated and used by man in past epochs, to test theoretical researches and to establish a long lasting cooperation to stimulate future actions in this specific sector.

At this regard, the papers included in this special issue can be considered for a two-fold goal: a first attempt in the process of transition from onsite visits and cultural exchanges between the two countries to the definition of a theoretical methodology for a comparative approach to Italian and Japanese underground sites; and, at the same time, the starting point for a new project financed within the same agreement for the period 2020/2021". [...]

Preview of the Special Issue 2020 on the Publisher web site