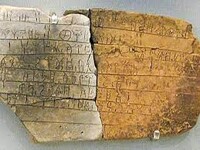 A portal created by the CNR for the study of "linear B", the ancient writing system in use in Greece at the end of the Bronze Age (14th-13th centuries BC), is now available to the world. It is a writing system, like cuneiform and hieroglyphic, based on the use of logographic (words) and syllabic (sounds) signs. The texts are mainly of an economic nature and constitute one of the main sources for studying the so-called 'Mycenaean civilisation'.

Thanks to the CNR's LIBER-Linear B Electronic Resources, a special search engine now makes it easy to query a constantly updated database. Currently, LiBER contains texts from Knossos, Mycenae, Tiryns and Midea, but new inscriptions from other sites will soon be made available.

On the site recently opened to the public (liber.cnr.it) it is now possible to research and analyse texts written in the oldest Greek dialect known to date: a heritage made available not only to scholars and experts, but also to students, enthusiasts and lovers of the subject.

The database contains transcriptions of the Linear B texts and their images, enriched with information on the scribes, the places where the documents were found, their chronologies and their places of preservation. The ultimate goal is to create a complete electronic edition of all Mycenaean texts known to date, in order to make available to everyone an incredible heritage that can still reveal much about this ancient civilisation.

The functions integrated in the system allow even very complex textual searches to be carried out and the results to be presented in the form of indexes or lists of documents, while also allowing the visualisation of the sites of discovery thanks to a powerful Web-GIS. It is therefore possible to virtually enter inside the buildings to fully appreciate the complex administrative organisation of their offices. At the same time, thanks to a sophisticated geo-localisation system, LiBER allows users to explore in presence the archaeological sites from which the texts originate, enriching them virtually with the information contained in the database.