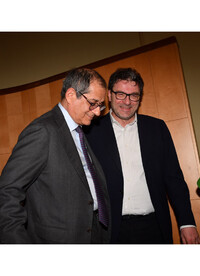 Giovanni Tria, a member of the scientific committee of the Mediterranean Economies, designated economic advisor for the organization and economic management of vaccines

The Minister of Economic Development Giancarlo Giorgetti has appointed Giovanni Tria as economic advisor to the government for the organization and economic management of vaccines, for the part concerning the national industrial production and relations with the European Union.

Giovanni Tria, Professor of Political Economy at the University of Rome "Tor Vergata" and previous Minister of Economy and Finance in the Conte Government (2018-2019), currently holds the position of Economic Advisor at the Ministry of Economic Development in the Draghi Government.

Professor Tria has been for many years a member of the scientific committee of the CNR-ISMed Mediterranean Economies (ME20), of which he presented the 2020 edition last 5 March, in a webinar organised by CNR-ISMed. International version of the Report on Mediterranean Economies (REM), published more than 15 years ago, the volume presented by Professor Tria deals precisely with the crisis caused by the Covid-19 pandemic, in a focus centred on the observation of factor mobility, later expanded with studies on the impact of the Covid 19 pandemic on Mediterranean socio-economic systems.

CNR-ISMed congratulates Professor Tria and wishes him all the best in his new role.