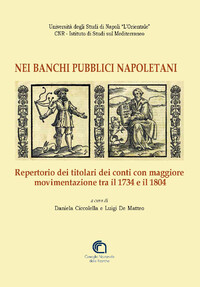 Book published within the PRIN 2015 In search of the "patriot shopkeeper". Mercantilism, economic morality and merchants in Mediterranean Europe (17th-19th centuries).

In the two centuries and more of their existence, the Neapolitan public banks played a central role in the economic and financial system of the Kingdom of Naples and its capital, Naples, where "there was no shopkeeper or wealthy house that did not largely exercise its income and profit trade through one of the banks".

The widespread recourse of merchants to the credit instruments of the public banks - bills of exchange and policies, on which the reason for the transactions carried out was affixed - makes the documentation preserved today in the Historical Archive of the Banco di Napoli a valuable source for the history of business and trade in the modern Mezzogiorno. A source capable of intercepting the enterprise, its organisation, its financial arrangements, its practices, the legal forms it took, its national and international networks, and thus of making up, at least in part, for the lack of business archives.

The Repertorio dei titolari dei conti con più movimentazione, conceived to facilitate the identification of the accounts of merchants at the seven public banks operating in Naples in the Bourbon eighteenth century, is a useful tool for a wide range of historical research. It contains the names of about 9,000 customers - shopkeepers, nobles, officials, clergymen, professionals, etc. - whose accounts were most dynamic in the eighteenth century. - For more than 3,000 customers, it also provides the affogliamenti, the first empirical description of the degree of movement of the accounts and the key to accessing the major books and, from there, the copiapolizze journals. This makes it easier for scholars to investigate the transactions carried out by customers of the Neapolitan public banks.