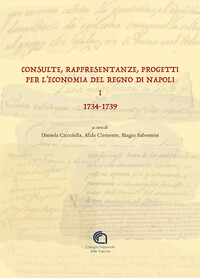 edited by D. Ciccolella, A. Clemente, B. Salvemini

During the first years of Charles of Bourbon’s reign and the newly found independence of the Kingdom of Naples, the intellectual, institutional and political sphere of the Neapolitan monarchy, as well as of the other European governments, was crossed by some concomitant phenomena: the identification of trade as a strategic context for building the nation and for its international positioning, but also as a place of legitimate expression of private interest, albeit to be reconciled with the public interest; the establishment of sovereign power over the old regime’s pluralism of jurisdictions; the involvement of technical knowledge, different from the juridical-administrative one, in the process of elaborating political decision. Old and new institutions are thus called to the normative construction of a universe ordered toward the production of wealth. It is a non-linear path, with a far from obvious outcome.

In this volume, the anxious, variegated, contradictory “experiments of power” that the government carries out in the field of trade regulation are observed, and offered to historical analysis, through the documentary lens of the consulta, namely an opinion requested by the sovereign to deemed competent  subjects in view of the production of regulations on all levels. The here proposed 330 texts, almost all unpublished, include also the representations presented to the sovereign by institutional subjects on their own initiative, good government projects proposed by individuals outside or peripheral to the central administration, consular correspondence, petitions, and other forms of communication of facts and opinions, all of them aimed at guiding political decision. An extraordinary insight into the conditions of the Neapolitan economy, the issues on the table, the languages and the protagonists of the first Bourbon reformism.