News books - At the origins of assistance in southern Italy. Institutions, archives and sources (13th-17th centuries) 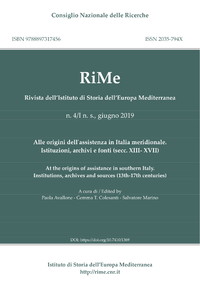 The volume is now published:

This monographic Special Issue of RiMe. Rivista dell’Istituto di Storia dell’Europa Mediterranea (n. 4/I n. s., giugno 2019), hosts part of the research presented at the conference on hospital archives in the Middle Ages to the early Modern Age, held in Naples in November 2017, as part of the PRIN project "Alle origini del Welfare (XIII-XVI sec.). Radici medievali e moderne della cultura europea dell’assistenza e delle forme di protezione sociale e credito solidale ("At the origins of Welfare (XIII-XVI sec.). Medieval and modern roots of the European culture of assistance and forms of social protection and solidary credit").
These studies - which contain research carried out in regions such as Abruzzo, Basilicata, Calabria, Puglia, Sardinia and Sicily - can be considered the partial achievement of the second aim of the conference: to draw a brief picture of the welfare institutions of southern Italy (brotherhoods, hospitals, public welfare and charities) that operated between the late Middle Ages and the early Modern Age.
Campania and the city of Naples, on the other hand, will be published in one of RiMe's next dossiers.