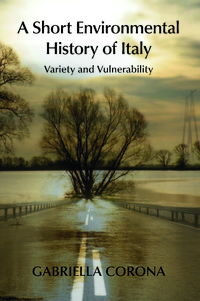 THE RICHNESS AND THE FRAGILITY OF ITALY’S HUMANISED ENVIRONMENT

This book, a translation of the author’s original Italian Breve Storia dell’Ambiente in Italia (Il Mulino, 2015) aims to bring together the general lines of interpretation of Italian environmental history from the decades prior to national unification to the present day, laying foundations for the writing of national history from an environmental history perspective. The volume reconstructs processes of change in the use of natural resources in Italy, and the associated environmental and social consequences. The use in historical analysis of a polysemic concept such as ‘environment’ expresses the deep synergies in the history of Italy that have tied together nature and human activities, ecological and socio-economic issues. The ancient roots of settlement, early anthropisation by past civilisations and historical features of the processes of transformation of rural and agricultural landscapes to which large areas of the peninsula have been subject impose a historical reconstruction in which changes in the use of natural resources are closely intertwined with changes in the territory considered as a natural historical context, built and humanised. Furthermore, corollary to the great richness and variety of nature and landscape, the artistic and archaeological sites, agriculture, gastronomy and oenology, that have ‘supported’ the country in its rise to global political significance, is vulnerability in terms of geological fragility, hydrographic system and seismicity.

The book aims to understand how Italy as a unitary state has ruled the balance of an area overwhelmed by the impact of an economic development model characterised by high consumption of natural resources and energy. With this in mind, an important focus of consideration is the relevance of public policies, and the relationship between policy-makers and the knowledge experts that influence them.

The book is divided into four parts, corresponding to four pivotal moments: the decades before national unification and the global factors at work; the end of the nineteenth century, when economic take-off combined with a hygienic revolution; the effects of Italian transition from a rural to a highly industrialised country in the decades after the second world war; and the 1980s in which laissez-faire capitalism and the acceleration of destructive processes co-existed with the growth of environmentalism and public environmental awareness. The chronological division is accompanied by a focus on topics, including: the effects of global changes and the role of structural characters; the repercussions for environmental equilibrium of ‘commons’ disintegration and the triumph of property rights; the impact of industrialisation and the hygienic revolution; the transition from renewable to non-renewable energies; nature protection, from the first movement to political environmentalism; the acceleration of soil consumption and of hydrogeological instability; the destructive modality of the expansion of metropolitan areas; the effects of agricultural modernisation, consumer society and the waste problem; the growth of ecomafias and environmental crimes.

Gabriella Corona is a senior researcher at the Institute of Studies on Mediterranean Societies of the National Research Council in Naples and teaches Economic History in the Humanities Department of University of Naples “Federico II”. She is co-director of Meridiana. Rivista di storia e scienze sociali and co-editor in chief of Global Environment: A Journal of Transdisciplinary History. Her books include Demani ed individualismo agrario nel Regno di Napoli (1995); I ragazzi del piano. Napoli e le ragioni dell’ambientalismo urbano (2007); Rifiuti. Una questione non risolta (2010), with D. Fortini; The Problem of Waste Disposal in a Large European City (2012), with D. Fortini; and the Italian edition of the present work, Breve Storia dell’Ambiente in Italia (2015) She has published many environmental history essays and has edited books including Storia e Ambiente with S. Neri Serneri (2007) and Economia e ambiente in Italia dall’Unità a oggi (2012), with P. Malanima.