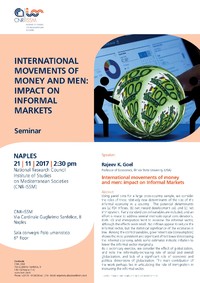 International movements of money and men: Impact on informal markets

Rajeev K. Goel is Professor of Economics at Illinois State University, USA. He received his PhD from the University of Houston. Dr. Goel’s areas of expertise include economics of corruption and the underground economy, technical change and applied microeconomics.  He is a CESifo Research Network Fellow and a Research Fellow at the Kiel Institute for the World Economy, in addition to serving on the editorial boards of various journals.  He is the author of two scholarly books and more than 150 scholarly articles.

More information about his research can be found at https://econpapers.repec.org/RAS/pgo308.htm

Using panel data for a large cross-country sample, we consider the roles of three relatively new determinants of the size of the informal economy in a country.  The potential determinants are (a) FDI inflows, (b) net inward development aid, and (c) net immigration.  Fairly standard control variables are included, and an effort is made to address several methodological considerations. Both FDI and immigration tend to increase the informal sector, although the effects seem small. Aid inflows appear to reduce the informal sector, but the statistical significance of the estimates is low.  Among the control variables, government size (consumption) shows the most persistent and significant effect toward increasing the informal economy, while some estimates indicate inflation to lower the informal sector marginally.

THIS SEMINAR IS OPEN TO THE PUBLIC