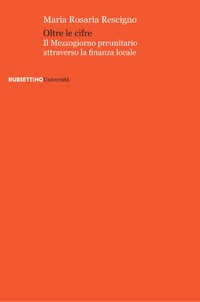 In the Kingdom of Naples the restyling that the municipal budgets know, in the passage to the "long" century, translates, among other things, into a refinement of the interpretative potential of this accounting tool. Through a refined lens, and using a vast and unprecedented archival documentation, the volume analyzes the more general renewal that, as a result of the introduction of a state system of modern conception such as that arrived with the French dynasty, the country experiences in the first half of the nineteenth century. To keep together the different survey plans that the source allows to practice, and which allow as many transversal paths, is the territory. Thus, the analysis of the presence of collective properties in a particular area of ​​the Kingdom, Basilicata, is being combined with the process of regionalization which, starting precisely from the experience of government across the Alps, is read through the case of some provincial capitals as well as several smaller towns. To emerge those that appear in more than one sense of the "southern stories" that, starting from the plane of figures, end up somehow overcoming them, with going beyond that, throwing in concrete a light on the forms assumed by the construction of the nineteenth-century Mezzogiorno .