Geopolitics meetings: From Libya to Algeria, our business 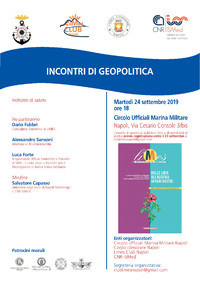 From Libya to Algeria, our business

The turmoil of North Africa in turmoil also hangs over Italy. Of the five African states bordering the Mediterranean today, one does not exist and has never really existed: Libya, which we will pluralise in Libya out of a debt of honesty to those who read. Another, Egypt, is equivalent to the Nile Valley, fertile and overcrowded strip of land irrigated by the longest river in the world, surrounded by very mobile sands, between the Western Desert, Sinai and Nubia. Tunisia, elevated by Western propaganda to a model of Arab transition from autocracy to liberal democracy, is daily engaged in denying it. The two great Maghreb rivals, Algeria and Morocco, remain. The one, Africa's first military power, has difficulty in controlling its own territory, shaken by a young and combative square, tired of the Pouvoir, but until now unable to unite around a platform, a leader. The other, an ancient monarchy, is today crossed by a protest wave that is certainly less swollen than the Algerian one, which, however, goes so far as to break the taboo of the immunity to criticism of King Mohammed VI.

The event is open to the public until seats are available and subject to registration by 23 September 2019 at: This email address is being protected from spambots. You need JavaScript enabled to view it.