From Naples to the Phlegraean Fields: in the footsteps of the Roman aqueduct 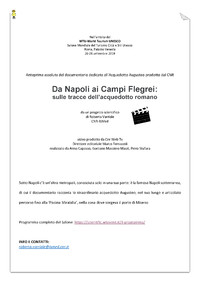 From Naples to the Phlegraean Fields:
in the footsteps of the Roman aqueduct

by a scientific project of Roberta Varriale CNR-ISMed

Under Naples there is another metropolis, known only in one part: it is the famous underground Naples, of which the documentary tells the extraordinary aqueduct Augusteo, in its long and articulated path to the 'Piscina Mirabilia', in the area where there was the port of Miseno.

Complete programme of the Show:

This email address is being protected from spambots. You need JavaScript enabled to view it.