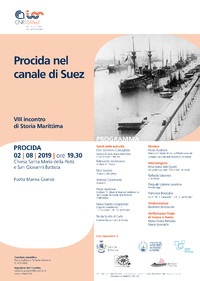 The opening of the Suez Canal was undoubtedly one of the most significant events of the late nineteenth century, an event destined to deeply mark the economic, political and cultural life not only of the Mediterranean. The Isthmus allowed the union of the Mediterranean to the Arabian Gulf and the connection with the ancient trade route in the East. Great progress was made in sea traffic. This page of history was attended by some Procidans who, several years after the opening of the Suez Canal, moved there. Common people, but also sea professionals, took part in this migratory flow and were called upon to act as pilots on the ships passing through the canal.

Today, the doubling of the Suez Canal has contributed to increasing the centrality of the Mediterranean in world trade. The growth rates of trade show that shipowners are increasingly favouring this route in their trade with the Middle and Far East. And on board the most modern ships, captains and machinists, trained at the historic Nautical Institute of the island (1788) continue to cross the isthmus participating in this new adventure of sea traffic on the Silk Road.

150 years after the inauguration of the Isthmus of Suez on 17 November 1869, the meeting of 2 August by Raffaella Salvemini, historian of the ISMed CNR of Naples, aims to draw attention to the stories of Procida men and families who emigrated to Egypt. In fact, we want to reflect on that red thread that links the past to the present and the future of the seafarers of our island. The meeting will be attended by historians, journalists, teachers. The testimony of the families of the Procidan seafarers who have given and continue to give lustre to the history of the economy and navigation of our country will be precious.

The event is part of a cycle of "Meetings of maritime history", born in 2009 and now in its eighth edition.

Greetings from the authorities

Final performance of music and dance

This email address is being protected from spambots. You need JavaScript enabled to view it.
www.ismed.cnr.it

In annex flyer and factsheet of the "Meetings of maritime history"

The event is sponsored by: