Author's Meetings - The Vision of Trump 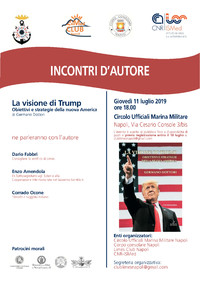 Trump's vision
objectives and strategies of the new America

The book aims to describe the actual objectives pursued by Donald Trump on the international scene, framing his choices in a long-term perspective that also takes into account the Jacksonian political matrix of his political action. The author argues that Trump's election is not an incident in history, but rather the result of trends that began the very day after the end of the Cold War, which have their ultimate root in the new structure of the international system and in the reluctance of U.S. public opinion to play a role of an imperial nature. The book supports the thesis that it is now gaining ground among American analysts too, according to which many aspects of the trumpian strategy are destined to survive it, even if perhaps interpreted in the future in a less brutal and sophisticated way than is currently the case. The main features of Trump's global project and its likely declinations on the most unstable regional chessboards, from the Far East to the East, will then be reviewed. Particular attention will be paid to the implications for Europe, the Atlantic Alliance and, of course, Italy.

DISCUSS IT WITH THE AUTHOR

The event is open to the public until places are available and subject to registration by July 10, 2019 at: This email address is being protected from spambots. You need JavaScript enabled to view it.